26 Jun The commons and care: moulding the clay

Posted at 08:49h in Research Network by Lisa Falaschi
Share 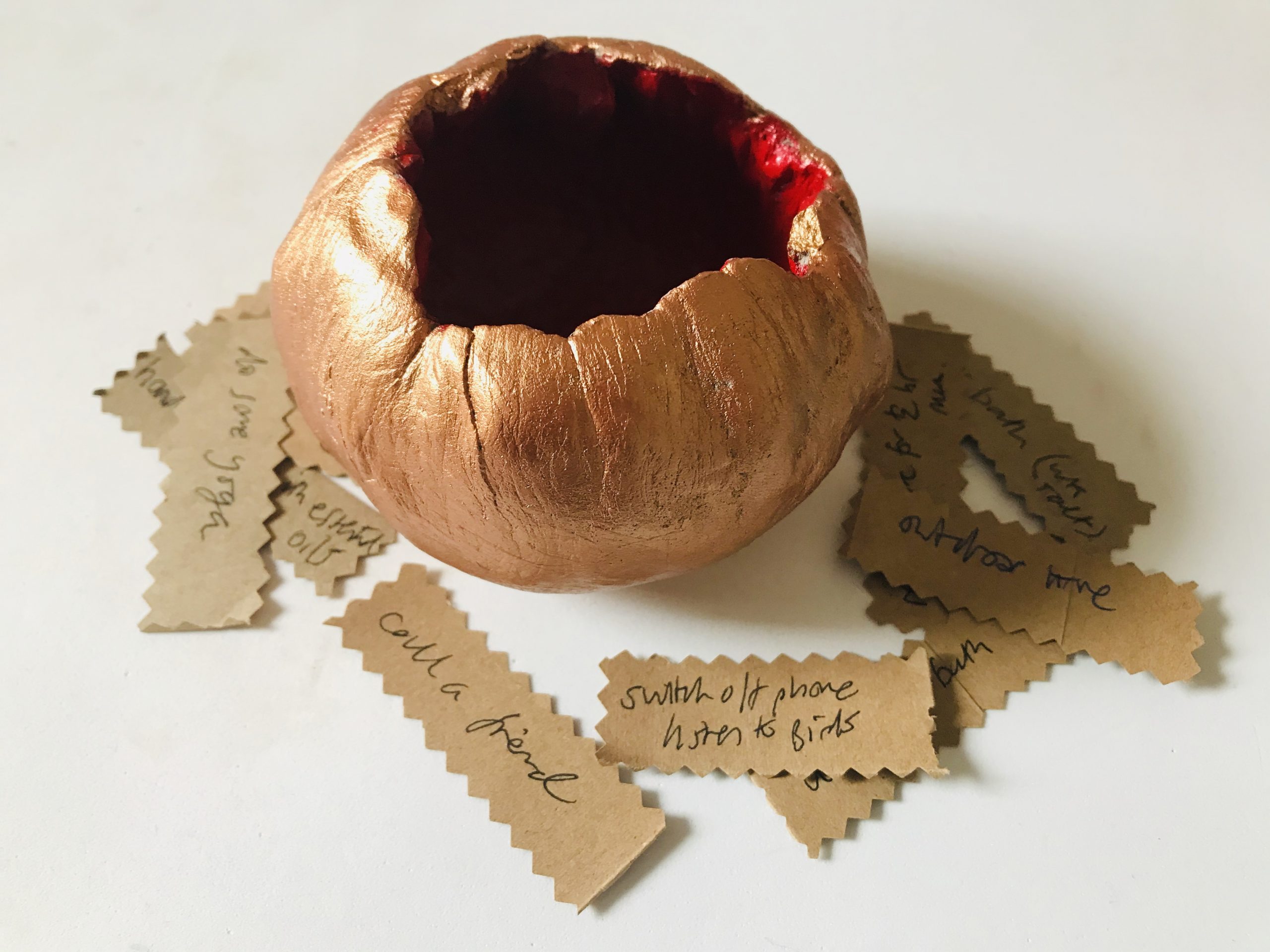 Each member of the Crafting the Commons network has been invited to write a post for the blog, capturing their thinking about commons and commoning as the project unfolds. This post is by Alinah Azadeh.

Alinah Azadeh is an artist, performer, writer and social activist. She has been making work for and with museums, galleries and across diverse communities for over twenty years, including the National Portrait Gallery, South Bank Centre, Fabrica Gallery and Freud Museum as well as internationally.

This is an abridged version of the script I wrote and used to make the second of five reflective, filmed workshops on Vimeo (titled Craft in Common) exploring the emotional/affective commons through making. These are taking the place of the workshop series I was due to run, as part of my artist residency in Balsall Heath and St Paul’s Community Trust, Birmingham for this project, that had to be cancelled, just as lockdown came into effect, due to coronavirus. The Vimeo series is just launching and can be viewed here on the Craftspace website.

You will need: a ball of clay or similar material. Take out your clay and play with it as I speak to you about care, let it take the form your hands follow.

What is care? Care is one of the most powerful emotional resources we have in this crisis. To care is; to nurture, to be present, attentive, available, show concern, interest, be mindful, be tactful, be conscientious. It’s connected to fondness, affection, devotion. Care from Caritas (Latin) – is giving, charity, benevolence, commitment. Care is tending, guiding – being guided. Care is interaction, friendship, intimacy. Care is a prime form of Love. Care responds to and arises out of pain and suffering – whether from decay, harm, abuse, violence, boundaries crossed, neglect or helplessness. Through it, we recognise in ourselves another’s pain, and from care comes sympathy, empathy, compassion, vulnerability – crucial qualities in response to current threats faced through our global environment, extremist politics and this global pandemic.

Where was care born? By a river. According to the Greco-Roman creation myth of care (or cura in Latin) its origin is this:

Once when ‘Care’ was crossing a river, she saw some clay. Thoughtfully, she took up a piece and began to shape it. While she was meditating on what she had made, Jupiter came by. ‘Care’ asked him to give it spirit, and this he gladly granted. But when she wanted her name to be bestowed upon it, he forbade this, and demanded that it be given his name instead. As they were arguing, Earth [Terra] arose and requested that her name be given to the creature, since she had given it a part of her body. They asked Saturn to be the judge, and he made the following just decision: “Since, Jupiter, you gave it spirit, you shall have that spirit at its death. Since you, Earth, gave it the gift of a body, you shall receive its body when it dies. But since ‘Care’ first shaped this creature, she shall possess it as long as it lives. As there is a dispute among you about its name, let it be called ‘homo,’ for it is made of humus (earth).” As in homosapien, human being …

So, care was born of two worlds; to truly live a human life seems to be to give oneself to care, a continuous act that sustains life.

Bring to mind someone or a group you care for / about or take care of: parents, carers, children, older people, pets, groups, a particular community, a place.

(Moulds clay into a figure)

If care was a person, I think it would; take a stand against violence, exploit or hurt, make a clear commitment to human flourishing and growth. Care is as fundamental as equality, justice and freedom. When we actively care, we transform things, others – and themselves. We are asked to step into the unknown and be courageous, to challenge injustice, to use the privileges we have to relieve suffering. To intervene to prevent harm, to work towards social change, or simply to be more present for another human being.

Care as commons; care crosses political, ethical public and private borders, creates a shared space for our work, our commitments, our feelings, our stories, our uncertainty and our ultimate vulnerability. Think of support groups or reaching out to neighbours or those in your community. It creates a living web of relations, invites us to connect with each other and society.

Care opens us up to a commons way of being, seeing humans as a rich resource that needs tending to, kept well and healthy. Care can create belonging and meaning, purpose and presence. Care of the self and the care of the common – of our society – are interdependent. Care seeks the balance between ourselves and others.

But Care has a shadow side. it can be burdensome, become sorrow, grief, worry, trouble. Care from Karo (German) – means lament. Care can lead to over-absorption in others, become anxiety, angst, misplaced attention, control, destruction and oppression. Burnout. So, within this, to relieve the potential burden of care we give others which can become too hard to bear, we have to seek the care of others for ourselves, professionally or personally.

But we can also cultivate self-care and find ways to maintain this, especially in a crisis. We can mould the clay for ourselves, thoughtfully, by the river as it flows past. Let’s explore this and begin our make.

(Moulds clay back into a ball, then into bowl (2 methods used on film). Creates a ‘vessel for self-care’).

Let’s common the various ways we show care for ourselves and place it in our vessel – either as small objects or words, on paper. Then pick one out a day and use it as a prompt to offer yourself these moments of self-care.

(Show the made bowl with my own suggestions to self; a walk alone, reading a book on the sofa, an afternoon nap, a hot bath or shower in the middle of the day, switching off the phone and listening to the birds instead, calling a friend, meditating).

If living with others, or in a family, you could make a collective vessel too, add suggestions in and take them out at random, thus creating continual commoning of ways to self-care together.

History of the Notion of Care,Warren T. Reich (Article, Encyclopedia of Bioethics (1995)

Politics and the Search for the Common Good, Hans Sluga (Cambridge University Press, 2014)